skip to main | skip to sidebar

The hard part of the trip is done. Only 150 miles left to go! I've already covered over 95% of the total distance, so how hard can this week be?

Despite the best efforts of Minnesota's stellar weather, I've arrived in New York City. Matt picked me up from LaGuardia, and we headed to Matt's apartment in Brooklyn. Below is a picture that concisely demonstrates why we're walking instead of driving the 150 miles. 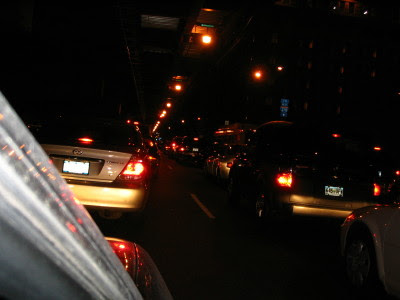 I have one question for pilots: Do you really expect passengers to not use the restroom when you leave the seatbelt sign on for a 2.5 hour flight? From Minneapolis to New York, our pilot might have turned off the seatbelt sign for 20 minutes, during which the flight attendants were in the aisles with their drink and snack carts. It goes without saying that, upon landing, the bathroom lines resembled Soviet-era grocery store lines. The collective sigh of relief was audible as far south as Philadelphia.

So, pilots...remember that biological systems continue functioning despite mild turbulence. Thanks!
Posted by Rob at 1:59 AM

Welcome to New York City Rob! Best of luck on your journey across the buroughs.

We here at BurnSomeDust aim to provide you with top-of-the-line travel and geography-related entertainment.